Friday April 7th, 2017 is the One Year Anniversary of the death of Luis Góngora Pat at the hands of the SFPD.

Luis was a 45 year old indigenous Mayan Mexican, an immigrant worker and a family man who for a decade and a half supported his wife and three children in the small town of Teabo by sending remittances from his dishwasher and line cook earnings.

In 2013, he and his brother were illegally evicted from their home in the Mission District during the peak housing crisis of San Francisco, after which they became homeless. Extended family helped his brother José get back on his feet, and the plan was to help Luis next, but his life was brutally ended before then; a victim of police terror in the Sanctuary City of San Francisco.

Luis was killed by Sergeant Nate Seger and Officer Michael Mellone of the San Francisco Police Department in 28 seconds from the moment of their arrival on Shotwell Street. The officers shot four to five rubber bullets and seven firearm bullets at Luis. They justified themselves by saying that Luis lunged at them. But eight eye witnesses contradict the officers, stating that Luis was sitting on the ground, his back to a wall, minding his own business, when the two officers started yelling and shooting at him. Luis, confused, stood to flee but was gunned down and executed with a shot to the head. The downward trajectory of the shot shows that Luis was on the ground when he was killed. More information about shooting here…

On Friday April 7th, we invite the residents of San Francisco to march with us to end police terror in the Sanctuary City, and celebrate the beautiful and courageous life of Luis Góngora Pat, an indigenous Mexican Mayan son, father, brother, and cousin.

On the one year anniversary of his death, Luis’s family will March Against Police Terror in The Sanctuary City of San Francisco. Your participation in the march is humbly requested. We will address Luis’s unjust killing, and heighten awareness of the systemic oppression that regularly takes the lives of people of color in the City of San Francisco through evictions, homelessness, discrimination, deportations, police violence, and other injustices.

“My cousin suffered many injustices to get to this Sanctuary City only to face more cruelty here. He suffered poverty, forced migration, low wages, illegal eviction, homelessness and discrimination, only to be killed by an act of senseless police brutality in less than 30 seconds,” says Luis Poot Pat.

District Attorney Gasón has made no charging decision in the 10 out of 11 officer-involved homicides that occurred from 2014 to 2016.

In October of 2016, the family of Luis Góngora Pat filed a federal civil lawsuit against SFPD, but the jury trial will not take place until October 22, 2018. At the federal court hearing on March 13th 2017 in which the date was set, Deputy City Attorney Sean Connolly, who is representing the officers, explained to Federal Judge Thelton Henderson that the trial date needed to be set so far-out because “several officer-involved shooting cases are pending in front of the court.” Source: 48 Hills More information about the Case Status here…

San Franciscan authorities have done nothing to make police officers accountable for killing Black and Brown people in the City.

How can you help?

The March Against Police Terror in the Sanctuary City in Commemoration of Luis Góngora Pat, killed one year ago by SFPD is CO-SPONSORED by:

Do No Harm Coalition

Members of the Shambhala Meditation Center of SF

Mothers on the March for Justice

In Spanish and Mayan, from Coalition’s visit to Yucatan Nov. 2016 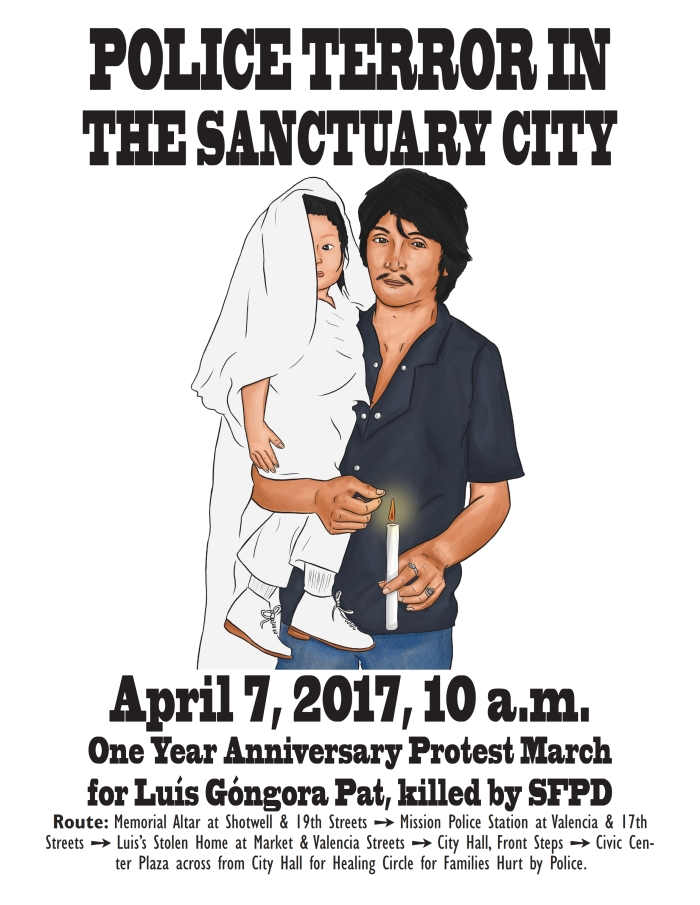