The Justice & Honor for Luís Góngora Pat Coalition has created an autopsy diagram based on the official report of the Office of the Medical Examiner. We believe the Office of the Medical Examiner did not include a diagram to avoid giving the public a visual image of the harm done to Luis. We believe the public is entitled to as full transparency as possible around the facts of the case. As we learn more facts, we will adjust and improve our narrative of what happened that day.

Luis was shot in the back at least 8 times, and executed with a shot to the forehead when he laid wounded and helpless on the ground. 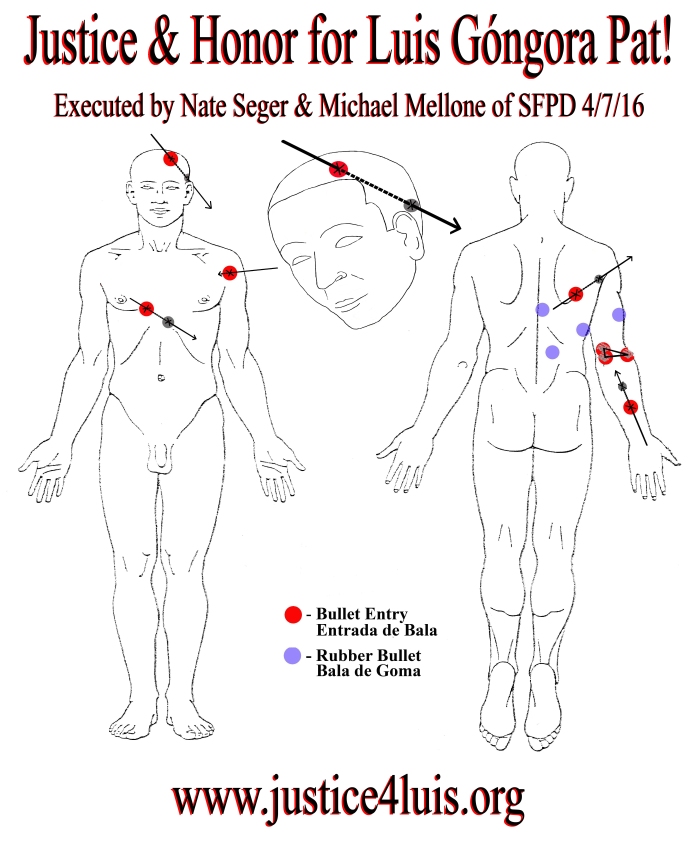 The above diagram is an approximate depiction of the rubber bullet and gunshot wounds on the body of Luis Góngora Pat, as described in the official Medical Examiner’s report.  Below is a list of the gunshot wounds following the order of the report, which is not the order in which they took place, but rather a head to toe documentation of the wounds.

A copy of the Medical Examiner’s Report can be downloaded here.

Based on the Medical Examiner’s Report, the eight eyewitness statements to the media, available security camera footage, and images of his body presented to the press from the independent autopsy conducted by the law firm representing Luis’s family, this is our theory of how Luis’ death occurred in less than 28 seconds from the moment that officers exit their car and mortally wound him.

Luis Góngora Pat did not have to die. There is no legal justification to his killing by Sgt. Seger and Ofc. Mellone.

The entire incident happened in 28 seconds as these officers unlawfully and unjustifiably attacked an innocent man, who was sitting on the ground, minding his own business!

Luis’s family and his community demand that the District Attorney charge his killers—Sgt. Seger and Ofc. Mellone—with murder.

D.A. Gascón do your job!

We invite supporters to call and write Gascón and demand criminal charges for the unjustifiable killing of Luis and that of many other San Franciscan community members, whose killings remain unaccountable.

Join us on Friday April 7th to protest his unjust killing!

Special thanks to our kind and reliable supporter S for their assistance in developing this diagram.